Disclosure. We’re a MTB holidays, guiding, skills coaching and servicing business so after almost 12 years in business we have lots of industry relationships and trade accounts. Nothing I review is free though (unless stated) so I make business decisions and spend business money on kit which usually has to be based on head, not heart.

Disclosure Part Deux. I’m new to this blogging malarkey so bear with me while I find my feet. It’s all honest, real world stuff though so hopefully you’ll like what you read and if you don’t you’ll either tell me or move onto something slightly more interesting.

After just over a year on the ‘best bike in the world’ (to steal a phrase from Guy Kesteven), I decided to sell my beloved T-130CRS and have a change...

Selling a bike after such a short time sounds a bit extravagant but as per my disclosure, we have a business trade deal with Whyte, so the method in the madness is to sell the bike on every 12 months so I can keep the bike/model up to date without much additional investment. Also, as I ride my bike for a living, I probably do three years worth of average riding in a year.

So why did I decide to have a change? I mean, apart from being a typical fickle bloke? Well, I was intrigued by the S-150 and the early reviews, so after a lengthy bit of soul searching, lots of social media opinions (and no test ride!), I decided to go for it. I figured the worst that could happen is that it wouldn’t suit me and I’d sell it to get back onto a 130.

Despite a bit of a waiting list, I got lucky and Alan at Whyte hooked me up with Andy at Wheelspin Cycles in Huddersfield, who’d had an over delivery, so after a good chat with a top guy, the bike was on its way.

When it arrived, I got the bike out of the box and my first thought was ‘Oh my God, what have I done!!?!” The bike looked huge! Huge bike. Huge wheels. Just. Huge! I’m 5’8″ and I cricked my neck looking up at it thinking I’ll need a mounting block to get on to the beast! I couldn’t let that stop me though so I massaged my neck, got my step ladder out and assembled the bike.

Over the years I’ve ridden lots of 29ers and my general view is/was (clue?) they’re big, they don’t like tight corners and they don’t like being off the ground that much but when you get them up to speed they’re very, very fast, smoothing out most trails.

So at this point I’m already wondering what I could sell it for, what an idiot I’d feel but what kind of idiot buys a bike without test riding it and then sells it without riding it!? I suppose I should at least try it?

I fitted the Invisiframe kit (the social media exposure on this is another story), adjusted a few bits and went for a ride in the street at night. I dropped the post to it’s lowest setting in the clamp (note. if you’re shorter than me you might want a shorter dropper post) and the fit was actually pretty good. The front stayed up nicely, manualling off kerbs easily and it felt, well, pretty balanced. I started to think maybe I’d not made such a hideous mistake.

Due to other commitments (mainly a Christmas meal I’d forgotten about!), I had to wait a few days before getting a proper ride on it. So on Saturday morning, I headed up to Dalby Forest with Bob Hollywood and Michael the Socks, set the sag on the suspension (decided to start with 25%), let some air out of the tyres and went for a spin….. on sheet ice!!

Okay, so it wasn’t all ice but it wasn’t the best day to put the bike to the test. The first climb out of the car park felt good though. It felt fairly urgent. Sure, the bigger wheels take a bit more effort to get started but when it came to the first test, the red rocky climb that so many people want to clean, it just floated over it. The T-130 was always fine on it with a bit of effort but the S-150 took away the need for much of that effort. Big wheels keep on turning..

Then onto the tight switchbacks which would be a right ‘mare on a 29er, right? Wrong. Whether it’s the 42mm offset fork or some other Whyte Magic, it just tracked round on rails* without feeling like it was folding in or was too wallowy.

*there’s a bit of technique involved too

I have to admit, I was starting to grin a bit at this point as I’ve never been ALL about the downs as anybody who’s ridden with me knows, I’m the nutter who likes the ups too.

And that’s almost as far as I got this time. I tried a short off piste section with a few jumps and wet roots which felt great, although the Minion SS on the rear isn’t the best for wet rooty loam sections (it sure rolls fast and corners well on the firmer stuff though). One unexpected thing I did find, is that a 29er with a 29mm rim does a better job on sheet ice than smaller (normal?) wheels! I heard Bob Hollywood (he makes good cakes) say, ‘how did you manage to ride over that!”. The strong sock game is Michael (hence the nickname above) who by all accounts is a mean Ice Hockey player and after this shot he was a complete legend on the ice, sliding the back end around with a massive cheesy grin! 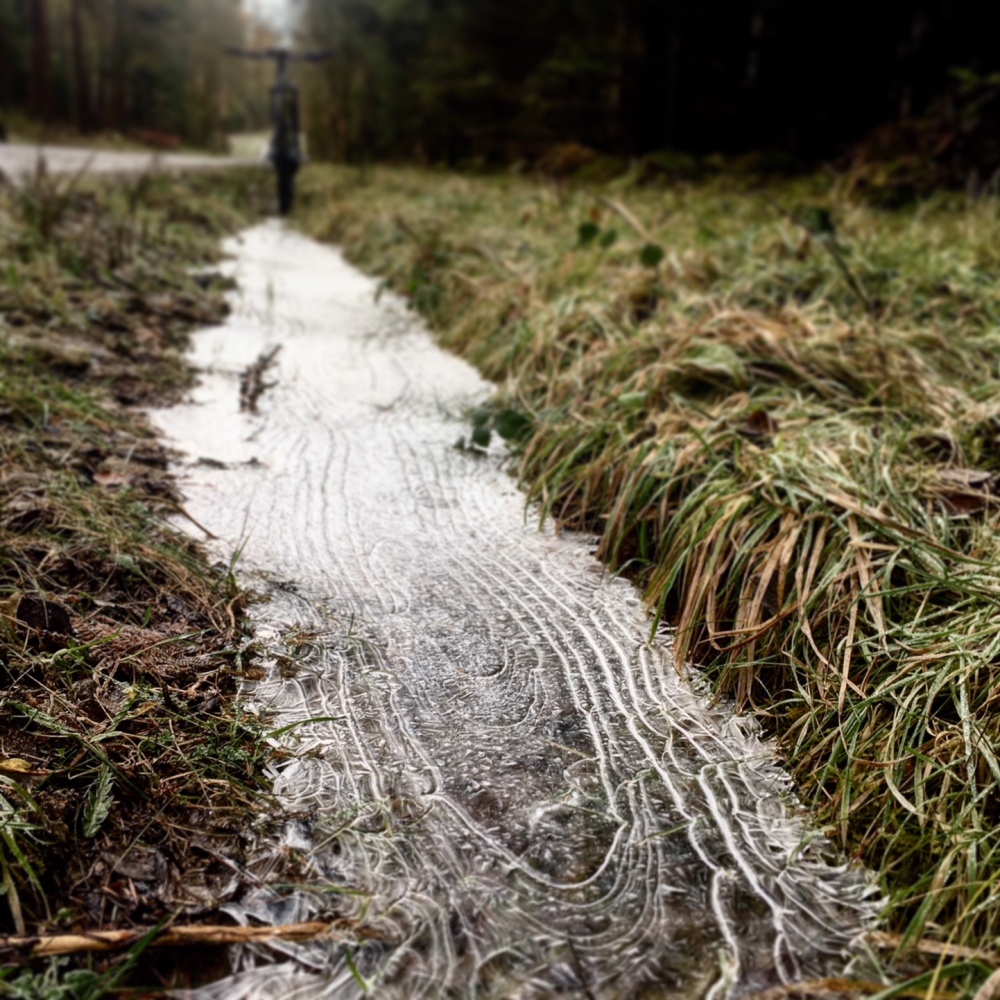 Gone Mountain Biking started out 15 years ago as a specialist mountain bike holiday company on the edge of the North York Moors and Dalby Forest offering skills instruction and guided holiday as well as stand alone days for every level of biker. Recently, we decided to change the business focus and sold our B&B (just before lockdown!). We still work on coaching existing clients but are moving to a model that works with and promotes other businesses we've worked with over the years and generally promotes all things cycling friendly in this wonderful part of the world. We're still super proud to be ambassadors for Whyte Bikes, Invisiframe and Mucky Nutz, with a few others on the way too. We are also developing an offshoot cycling photography business called VeloPhoto. View all posts by GMTB